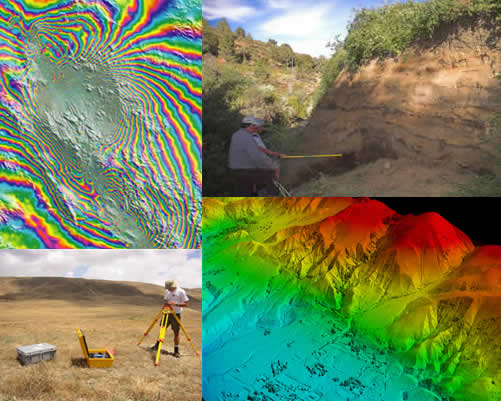 GeoEarthScope was a part of the EarthScope Program which included the acquisition of aerial and satellite imagery and geochronology to examine the strain field beyond the decade time scales available from the EarthScope - Plate Boundary Observatory (PBO) geodetic instrumentation. A goal of EarthScope is the improved understanding of the tectonic evolution of the North American continent. Identifying and understanding deformation rates in all tectonic regimes is critical to reaching that goal. UNAVCO provided support for GeoEarthScope related imaging and geochronology activities.

GeoEarthScope MREFC activities operated by UNAVCO concluded successfully on 30 Sept 2008. An overall summary of accomplishments is as follows:

SAR Data for InSAR Imagery:   Synthetic aperture radar (SAR) data suitable for interferometric analyses were ordered from data provider catalogs, spanning the period from 1992-2008 and covering all of the western U.S. as well as parts of Alaska, Hawaii, and regions in the eastern and southern U.S. The GeoEarthScope catalog contains 16.5 TB of select SAR datasets co-located to UNAVCO SAR archive from the Alaska Satellite Facility (ASF) and the European Space Agency (ESA):

Geochronology:   Twelve geochronology laboratories received GeoEarthScope funds in 2007 to provide geochronology services to investigators independently identified and supported by NSF via the standard proposal process. For the list of supported labs and available services please refer to the following FAQ.