The Active Tectonics of Diffuse Intracontinental Deformation project of Dr. Brian Wernicke and Dr. Jim Davis was to study diffuse intraplate deformation along the 41° parallel in the Basin and Range province, which has been a locus of diffuse plate margin deformation for at least 500 Ma. The Basin and Range province is about 800 km wide and comprises 25-30 evenly-spaced, major Quaternary fault zones, but historic seismic strain release is restricted to three belts each approximately 100 km wide. Previous geodetic work showed that the Basin and Range is expanding at approximately 9-13mm/yr, corresponding to an average of only about 0.3mm/yr across each range block, requiring very stable monumentation in order to acquire satistfactory GPS data to measure such low tectonic rates. 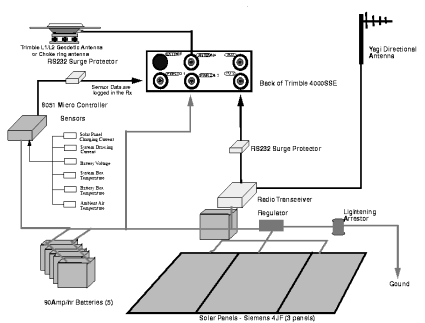 UNAVCO was responsible for the development and design of the Basin and Range permanent GPS systems for this project. Extensive development was conducted at UNAVCO for broader applications to the UNAVCO Community with the first sites comprising what came to be known as the Northern Basin and Range network, with site reconnaissance starting in June 1995 and installation in July 1996 - July 1997. Site reconnaissance and installation of another major component, the Southern Basin and Range network, started in the summer of 1998 with data flow starting in Jan-Mar 1999. Collectively these two networks became known as the Basin and Range Geodetic Network (BARGEN) comprising 75 permanent GPS sites. Many BARGEN sites were included in the EarthScope - Plate Boundary Observatory (PBO) GPS Network after upgrading through the PBO Nucleus project.

The stable monumenation used for BARGEN was deep-drill brace monumentation — developed by Southern California Integrated GPS Network (SCIGN) — and later refined for use in the PBO GPS network. In addition, UNAVCO and Dr. Davis co-developed the first hemispherical radome for use with the choke-ring antenna used at BARGEN sites to reduce the affect on phase center offset by the radome. This clear plexiglass UNAVCO radome was the predecessor to the SCIGN radome used in the PBO GPS Network.

BARGEN data was included in the Smithsonian Astrophysical Observatory's Western U.S. Cordillera (WUSC) Deformation Project to determine the full spectrum of crustal deformations associated with active geodynamic processes in the western United States by linking existing geodetic networks such as BARGEN throughout this diffusely deforming continental region, and to assist the geo-scientific community by providing useful data products derived from the aggregate geodetic network.