UNAVCO constructed a testing facility located at Marshall, just outside Boulder, Colorado. The testing facility was originally funded by NASA-GGN through the UNAVCO cooperative agreement and is now funded as part of the GAGE Facility. NASA's Global GPS Network (GGN) faces many challenges in the near future primarily due to maintenance of aging equipment. In order to take advantage of the advancements in satellite navigation technology which include GPS modernization and other GNSS constellations such as Galileo, new equipment is tested and validated. 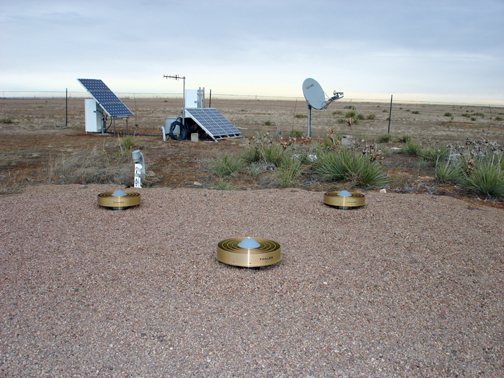 The Marshall Field Testing Facility is used to test permanent GPS station equipment in a controlled, but realistic environment, ensuring the GGN (accounting for approximately 15-18% of the IGS) will be prepared to meet the requirements of tomorrow's GPS technology, and be able to model the uncertainties and biases that will inevitably follow the equipment upgrades at core reference frame sites. Some of the issues addressed are: monument stability, position changes due to antenna replacements, methods for real-time data retrieval with minimal latencies using various communication methods and protocols, the effects of radome placement and removal on position solutions, along with rugged environmental testing of receiving and data collection equipment at various temperatures. The monuments constructed for this test facility are located on opposite sides of P041, one of the first Plate Boundary Observatory (PBO) sites installed. P041 is a deep drilled braced monument and serves as an excellent reference for processing the test data.