Tutorial: The Geoid and Receiver Measurements

In this tutorial, you will learn about the difference between the reference ellipsoid and the geoid, and how these concepts come together to tell us the true elevation above sea level.

Receiver Measurements and the Geoid

What Does the Real Sea Level Look Like: The Geoid Model

Let's review what we know so far:

So, what does the real shape of sea level look like? In the The Shape of Earth and Reference Ellipsoids tutorial, we discussed that actual sea level is a rather complicated shape. Even after accounting for the effects of oceanographic and atmospheric factors such as winds, tides, and ocean currents, the actual surface of the ocean (what we call sea level) is still bumpy. It turns out that those bumps are a reflection of the mass distribution between that location and the center of the planet. Here’s why.

All objects have mass. Gravity is an attraction between two masses that causes them to accelerate towards one another. Without gravity, if you held a pencil in the air and let go, it would just float (like it does for astronauts in the space station). With gravity, if you hold the pencil and then let go it falls to the ground. More specifically, the pencil accelerates towards Earth and Earth accelerates towards the pencil. Now you might think, "I have never seen the ground move towards my pencil when I drop it!" That’s because Earth is SO MUCH BIGGER than everything on it so we can't detect the planet moving towards things when we drop them.

Below is a cartoon that depicts a pencil accelerating towards the center of Earth (big black arrow) and Earth accelerating towards the pencil (small black arrow). For more advanced students, the equation for gravitational force can be used to calculate the gravitational attraction between Earth (mass, m1 = 5.97 x 10^24 kg) and the pencil (mass, m2 = 0.001 kg). Try the calculation by assuming that the distance from the surface of Earth to its center is approximately 6,360,000 meters, and that your hand is roughly 1 meter above that surface. You can also calculate the acceleration due to gravity of Earth towards the pencil and the pencil towards Earth. Which acceleration is bigger? (Click here for the answer).

We’ve just learned that the pencil and Earth accelerate towards each other because both have mass. Let’s now expand this concept of gravitational attraction and acceleration and apply it to answering the question of why the true shape of sea level is complex.

The ocean floor is far from being flat and featureless. In fact, underwater volcanoes, mountain chains, fractures, faults, trenches, and other features are found under our oceans. Furthermore, scientists have mapped rocks with different densities beneath the seafloor. Now, physics dictates that water has to come into equilibrium with the local gravitational attraction. As a result, the surface of the ocean molds itself into bumps and troughs to reflect these differing gravitational attractions. For example, a large volcano sitting on the seafloor tends to pull ocean water towards it, making the surface of the ocean pile up above it. For some large, dense volcanoes, the surface of the ocean is piled up to a height of a few meters above it! In contrast, an oceanic trench does not exert as much pull as do the surrounding regions so water moves away, creating a small trough in the ocean surface above the trench.

Below is an image of what the real sea level looks like for the entire world. The purple and blue spots are depressions in the sea level, while the red areas are high points. This image is a picture of the reference geoid. There are, in fact, different reference geoids for different areas of the world, depending upon which specific reference level is desired. The global version shown here is called the WGS-84/EGM96 reference geoid. It is the current best model we have for approximating sea level (the actual surface of the ocean). 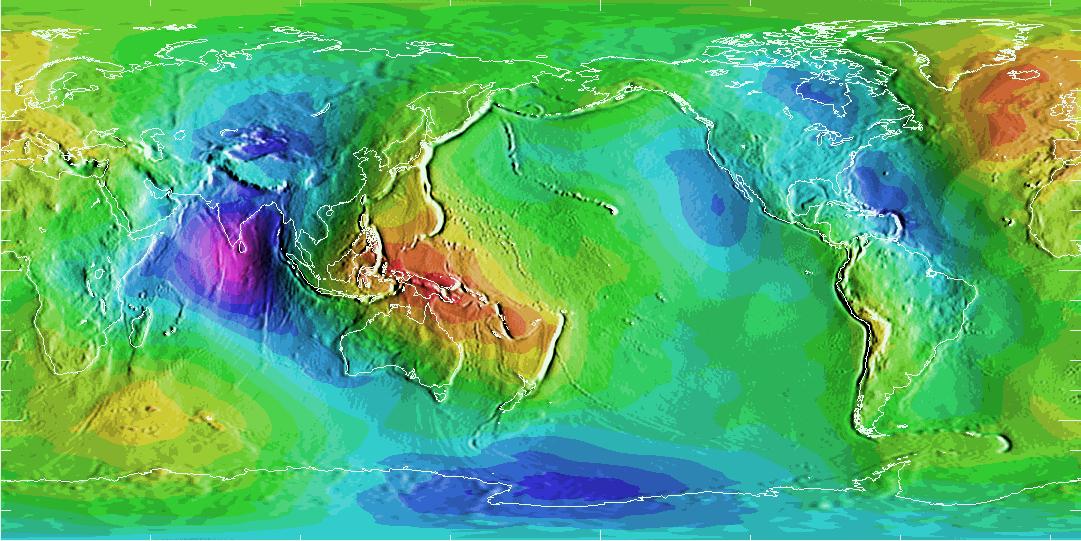 Putting it All Together 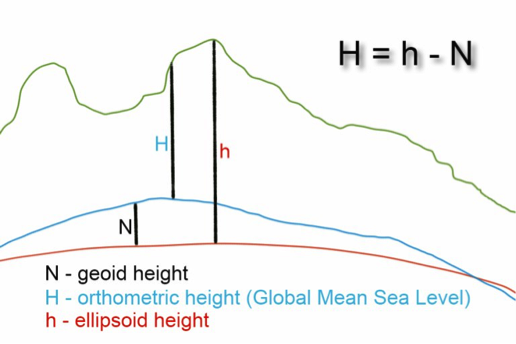