Network of the Americas (NOTA) 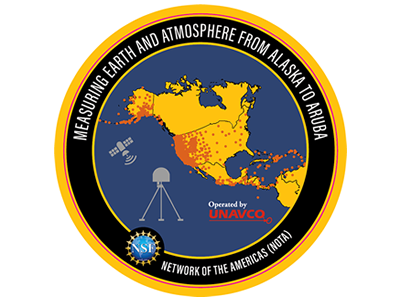 Network of the Americas (NOTA) is an international geoscience community project that supports a wide range of stakeholders. Basic and applied Earth Science research, including precise determination of plate motion, transient deformation related to earthquakes and volcanic eruptions, and tropospheric and ionospheric remote sensing are some of the focus areas.

Continuous GPS, and now GNSS, (cGPS/cGNSS) are well suited to capture surface deformation occurring at time scales from seconds to weeks and months, such as that associated with viscoelastic deformation during and following earthquakes, decadal-scale estimates of strain accumulation along plate boundaries, and plate motion and their spatial variations. Under the current GAGE Facility, UNAVCO has integrated and federated pre-existing, NSF-funded cGNSS-Met networks into a single pan-American network that encompasses the EarthScope Plate Boundary Observatory (PBO - spanning Alaska, the continental US, and Puerto Rico – MREFC funded; Williams et al., 2010; Mattioli et al., 2015), TLALOCNet (40 stations in Mexico – MRI funded; Cabral-Cano et al., 2018), and COCONet (85 stations spanning the Caribbean; Braun et al., 2012). We have designated this hemispherical-scale, distributed cGNSS-Met resource as Network of the Americas (NOTA). The federation of PBO, TLALOCNet, and COCONet as the newly envisioned, pan-American NOTA will support a wide range of scientific applications and stakeholders.

A Custom Data Request can be made for special situations at certain sites for the following (please see the form, at link to the left, for other requirements):

To meet NSF-mandated performance metrics for PBO under the previous GAGE Facility (2013-2018), the GI program devoted 1 overall project manager, 3 regional managers, 9 field engineers, and 1 technician for a total of 14 full-time staff. Two on-call engineers and one summer intern also supported this task on a part-time basis. Given that NOTA now includes PBO, TLALOCNet, and COCONet, this number has increased modestly to 16 total GI staff (headcount), but the FTE will be slightly lower, since all staff supporting NOTA O&M also have other responsibilities under the Frontier GAGE Facility task, Upgrading continuous networks from GPS to GNSS. Regional offices in San Clemente, CA; Ellensburg, WA; Anchorage, AK; and the Boulder, CO headquarters continue to provide a base of operations for field engineering staff to optimize maintenance and modernization activities (see below) for NOTA and to minimize travel costs and time. The GAGE GNSS Operations Manager provides high-level management for the NOTA network.

NSF funding for NOTA GNSS Operations and Maintenance has been reduced ~10% under the GAGE Facility (2018-2023). Accordingly, UNAVCO staff undertook a process to evaluate NOTA stations for possible decommissioning and removal from the 1278 station NOTA. Staff prepared an initial list of ~250 NOTA stations for review by the Geodetic Infrastructure Advisory Committee. Stations were included for evaluation for the following reasons: 1) poor performance; 2) spatial redundancy; 3) high O&M costs (operations or permits); 4) ongoing manual data downloading; and 5) lower priority for NSF community PIs. Stations could be included in more than one of these categories. The GI AC reviewed this list and developed recommendations on the overall category prioritization and also evaluated specific stations within each category. The list was winnowed to 165 stations and the GI AC recommendations were sent to the UNAVCO Board of Directors for review and approval. A map depicting the complete list of stations considered for decommissioning along with the reason that the station was included is shown in Figure 2a. Please see an Excel workbook of stations considered for decommissioning. The final 128 NOTA stations that are the highest priority for decommissioning is shown in Figure 2b. The final schedule for station decommissioning will be determined by NSF after public comment. We anticipate that decommissioning could begin as early as Y1Q4 (July-September 2019) and continue until the process is completed.

One of the most exciting benefits in the current GAGE Facility is the potential to use NOTA as an expandable platform on which ancillary scientific instrumentation can be added to further scientific goals of the global geodetic community (Figure 2). Currently, 145 meteorological instruments are co-located with PBO GPS stations. All TLALOCNet (n=40) and COCONet Core (n=85) stations have surface meteorological instruments, bringing the total to 270 in NOTA. Together, GNSS data and metpacks constrain column-integrated precipitable water vapor. Under the GAGE Facility (2018-2023) two Frontiers initiatives have been prioritized: 1) Continued modernization of NOTA, as core Facility resources permit, to high-rate (>1 Hz), low-latency (<1 s), well-hardened sites to support research activities related to transient phenomena; and 2) Renewal of ~1/4 of NOTA extant cGPS stations to full multi-constellation, GNSS. Both of these Frontier tasks build on the specific recommendations of the Committee on National Requirements for Precision Geodetic Infrastructure (NRC, 2010) and the Leesburg report (Aster & Simons, eds., 2015). Other NOTA station enhancements will include the integration of cGNSS and seismic systems to support research and development in hazard monitoring and earthquake early warning. In particular, when coupled with real-time-GNSS-capable sites, low-cost micro-electro-mechanical systems (MEMS) accelerometers (Saunders et al., 2016) will greatly enhance real-time risk mitigation during large earthquakes (>M7) and volcanic eruptions (>VEI6). Under the previous GAGE Facility (2013-2018), 22 PBO stations proximal to major fault systems in Southern California and the San Francisco Bay Area now have MEMS accelerometers.