Dr. Charles (Chuck) Meertens retired from UNAVCO after 35 years of service to the geodetic community. Chuck was a founding employee of the UNAVCO Facility in 1984. Since that time he filled many roles from Facility Manager to Acting President and was the Director of Geodetic Services from 2011 until his retirement in July 2020. Chuck received the Ivan I. Mueller Award for Distinguished Service and Leadership from the American Geophysical Union in 2015.Current and former staff gathered virtually with community members in August 2020 to congratulate him on his retirement.

Dr. Hamburger closed the roast with this poem:

ODE TO CHUCK MEERTENS ON THE OCCASION OF HIS RETIREMENT

Who do you call up when your antenna gets fried?
Who designed a new system to detect the Earth’s tide?

Who sits through IGS meetings without getting tired?
And who’s our man to step in when the Prez gets fired?

Who’s UNAVCO’s guru of data, be it NSF’s or NASA’s
And who developed a map tool that works for the masses?

Who do we call when our receiver goes up in smoke?
And who cleans up the mess when the budget goes broke?

Who’s brought geodesy alive through pure joy of preaching?
And who started UNAVCO on its course to outreaching?

Who can design a new laser strain seismograph?
And who has our community’s most infectious laugh?

Who’s always got ten new ideas at his disposal?
And who’s Mr. Reliable when it comes to UNAVCO proposals? 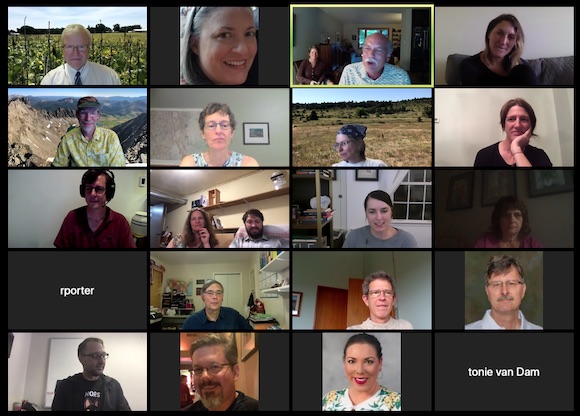 Who designed the L1 system, from theory to install
To monitor volcanoes from Kilauea to Taal?

Of course you all know the wizard behind our curtains
It’s our hometown geo-magician, the one and only Chuck Meertens

It was a bittersweet moment when we got the news on the wire
That our good friend Chuck Meertens decided to retire.

Here’s to a friend and a colleague universally admired.
And to the great contributions that’ve been Meertens-inspired.

We can’t count up the ways we’ve all come to depend.
On our colleague, confidante, supporter, and friend

So come all you geodesists, and raise up your beers,
And join me for a moment and wishing good cheer.

With best wishes to great bikes and sails and skis
And hopes that post-UNAVCO life will be one big breeze!

And one final word to Chuck from our whole entourage:
With gratitude and affection, BON VOYAGE!