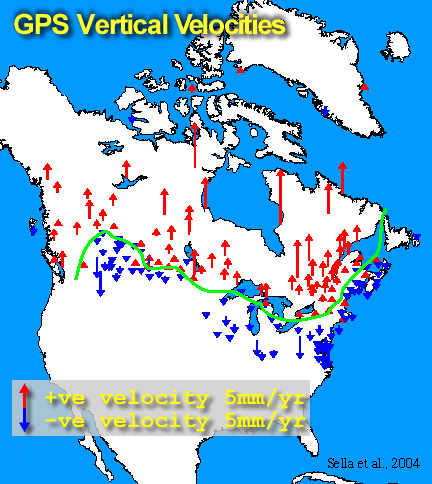 GPS is measuring the present motions associated with the response of the earth to the great mile-thick ice sheets that covered the area 18,000 years ago. Long after the glaciers melted, we use the Global Positioning System (GPS) satellites to "see" the land moving -- up to half an inch per year in some places -- as the earth rebounds in response to the ice that once pushed the land down. Looking at data from more than 200 sites across the continent shows a spectacular pattern. While sites in Canada are rising, with those near Hudson Bay -- which is where the ice load was heaviest -- rising the fastest, U.S. sites south of the Great Lakes are sinking instead of rebounding. These small motions result from post-glacial rebound" and stem from the fact that the mantle below the earth's crust flows like a super-viscous fluid -- much, much stickier than road tar or maple syrup. The mantle is still flowing to fill areas underneath the places where the heavy ice sheets pushed out the mantle 18,000 years ago.

Post-glacial rebound also affects the water levels of the Great Lakes. As the northern shores rise, water levels are steadily decreasing. Conversely, as the southern shores sink, water levels are rising. This impacts not only industries and homeowners along the shores of the Great Lakes but also the international management of water levels, dams and shipping. These small motions may also be one of the causes of the mysterious earthquakes that occur in the center of the North American continent, including the St. Lawrence Valley, northern New England, and perhaps even the New Madrid earthquake zone in the central U.S., and along the Atlantic coast including Newfoundland.