US Geological Survey and NASA's Jet Propulsion Laboratory geophysicists made two significant findings about how and why the ground moves beneath Los Angeles. The researchers combined satellite radar images and Global Position System (GPS) observations to measure more accurately than ever before the tectonic squeezing of the region that is responsible for earthquakes like the 1987 M=6 Whittier Narrows and M=6.7 Northridge shocks. In the process, they discovered that large regions of metropolitan Los Angeles are rising and falling by up to 11 cm (4.3 in) every year with a large portion of the city of Santa Ana sinking at a rate of 12 mm (0.5 in) per year. 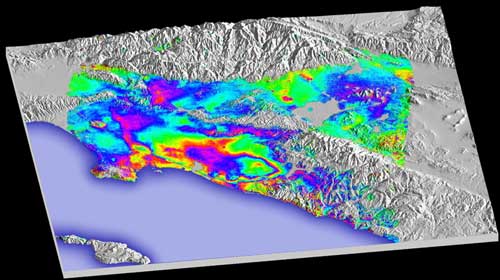 FIGURE 1:  Satellite radar interferogram draped over the topography of metropolitan Los Angeles, California. The repeating color bands of the large oval show about two inches (54 mm) of subsidence throughout the basin between May and September, 1999 (175 days). The Newport-Inglewood fault is the straight line located just inside the coast line. The small isolated 'bull's eye' feature North of Palos Verdes and East of downtown LA is from pumping activity in the Inglewood oilfield.

The satellite radar images show that the 40-km (25mi) long Santa Ana basin (which includes the cites of Santa Ana, Anaheim, Garden Grove, Norwalk, Downey, Lakewood, and Fountain Valley) rises every winter and then drops during the summer. This 'breathing' of the earth's surface is not caused by the tectonic forces that squeeze the Los Angeles basin, rather it is caused by the widespread pumping and recharge of groundwater, the basin reacting like a giant sponge that is annually drenched and drained. The magnitude and extent of these motions are a product of Los Angeles' great thirst for water; they are unprecedented, and have not been observed elsewhere in the world.

FIGURE 2:  Schematic block diagram showing the association of GPS site motions with blind thrust faults in metropolitan Los Angeles. The blind thrust faults are in bold orange lines and other active faults are thin orange lines. Large earthquakes are shown as orange stars with the date and magnitude. The large white arrows show the direction of shortening across Los Angeles with the expected motion from the strike-slip faults removed. The size of those arrows does not relate to any particular scale. Figure modified from Fuis et al., 2001 (Geology).

Since the risks for earthquakes in Los Angeles are greater than any other city in the United States, determining which faults are moving and how they move is an essential step in assessing earthquake hazards. After the Whittier Narrows and Northridge earthquakes revealed that blind thrust faults threaten metropolitan Los Angeles, an array of 250 continuously recording GPS stations (SCIGN) was deployed to detect and monitor the motion associated with the movement of the blind thrust(inclined faults that do not reach the surface) and the surface faults. Gerald Bawden and his colleagues analyzed data from this network and found that groundwater, oil, and natural gas pumping produce motions at some of the GPS sites that obscure and in some cases mimic the tectonic signals expected from the blind thrust faults. The satellite radar imagery allows them to discriminate sites that contain only the tectonic signal from those that have a combination of tectonic and human-induce motions. By utilizing only the GPS sites that contain tectonic signal, they determined that the tectonic squeezing (4.4±0.8 mm/yr: 0.17±0.3 in/yr) across Los Angeles will likely produce earthquakes on the either the blind Elysian Park or Puente Hills thrust faults systems.

The seasonal rising and falling of the Los Angeles area is caused by the increasing demand for water throughout the region. To meet the growing need for water during the hot summer months, water districts in southern California pump water into the ground throughout the year, and then when the demand for water is highest (between May and September), water is pumped out of these large underground 'reservoirs'. The repeating pattern of pumping and recharge produces the seasonal motion that is evident in the satellite imagery and GPS observations. Repeatedly lowering the water table each summer to new lower levels is causing the Santa Ana basin to sink, with about 84 mm (3.3 in) of subsidence near Santa Ana between 1993 and 1999.

Research for this project was made possible with a research grant from NASA. Please see http://quake.usgs.gov/~bawden for more information.